Early in 2020, one of our network equipment vendors announced a series of vulnerabilities that, if exploited, could have impacted our network infrastructure. We immediately made plans to deploy the vendor-provided patches to secure our infrastructure. Some infrastructure didn't support patching though, so we needed to expedite the certification and deployment of a new network operating system (NOS) version on several thousand switches and routers.

Then, COVID hit. We were still expediting the process to upgrade our network infrastructure, and, like most other companies at the time, our office buildings were empty. This enabled us to schedule NOS upgrades across several thousand devices in these buildings in a single weekend without causing user impact. Once we finished with user spaces, we proceeded to upgrade data center and network core environments, again, without causing user impact.

Many server and desktop operating systems have built-in patching mechanisms. For example, Linux has yum/dnf/apt; Windows has Windows Update. Proprietary operating systems that run on network devices mostly use older methods - copy a file to the device and manually execute upgrade commands. The file that gets copied to the device is usually a complete NOS image, meaning that deploying patches and upgrading the entire NOS are handled in the same fashion. We built a NOS upgrade system several years ago partially to respond to vulnerabilities, but primarily to ease the operational burden of manually executing NOS upgrades. We used this system to execute the aforementioned thousands of upgrades in a compressed period of time.

This post describes our homegrown NOS upgrade system, including the mechanisms we use to execute upgrades at scale in a non-disruptive fashion in both people and data center spaces.

Network devices in our environment are all configured in accordance with predefined patterns. We call these patterns products, each of which consists of a use case, physical hardware model, NOS version, and collection of relevant attributes. For example, we may have a product for data center access switches and a separate product for data center core routers. Each product has one or more hardware models and NOS versions associated to it. We may reuse hardware models and NOS versions by associating them to different products in a variety of permutations.

This product catalog concept mirrors the way a customer might order an item from an online store. The customer browses the catalog, finds something they like, and asks the store owner to send them one of that item. A different customer can order the same product from the catalog, and they will receive an identical but physically different item than the first customer received. In our case, a network operator "orders" a particular product from our catalog and the individual instance of that product, a specific network device, is tracked in our inventory. Since the network device maintains its relationship to a product in the catalog, we can make assertions about the new device before making it available for use by our clients. One such assertion is that the device is running a currently recommended NOS version. When it comes time to upgrade this device to a new NOS version, we mark the old version for removal and clearly specify which new NOS version to upgrade to. The catalog describes a lot more about our network building blocks but we'll leave it at this for now.

The NOS upgrade process is fairly straightforward. Most network devices can be upgraded using the following process:

Once the device has reloaded, it typically restarts its processes and reestablishes network adjacencies. At this point, we expect the NOS upgrade to be complete and the device to have automatically reintroduced itself back into the network.

Since we don't like to leave things to chance, we validate that the device came back up into a known-good state before declaring the upgrade process successful. Sometimes this means making assertions about any device that undergoes the upgrade process. For example, if we just upgraded the device to a specific NOS version, we can safely assert that the device should be running that new version. Other times we compare the post-upgrade state to the pre-upgrade state. To do this, we gather a collection of interesting state information from the device, execute the upgrade, gather the same state information again, and compare the two state collections. When comparing state, we're specifically interested in things like the state of a device's physical interfaces and routing protocols. Some state differences however are not relevant to the upgrade. A common example of this is counters that record things like the number of packets that traversed an interface since the interface came up. Other differences are expected but still need to be validated. A common example of this is when a vendor changes how the device represents a particular state in a newer NOS version. We build comparison logic to compare these two dissimilar values that represent the same state for each permutation of NOS versions that we upgrade from and to.

We built components to handle upgrade execution and checkout and tied them together into an end-to-end workflow. The workflow goes through the following steps for each device to be upgraded:

The initial version of the upgrade workflow worked well, however we knew that we could optimize the process and reduce the burden placed on our network operators during maintenance windows. We determined that an optimal experience should be for a network operator to provide a list of devices to upgrade, and our system will figure out which order to execute each change. The goal is to avoid causing any complete network connectivity outages for clients. All servers in our environment connect to the network via a pair of network interfaces. This means that we should be able to take down one switch to which a server connects and this won't cause a complete outage for that server. All of our core infrastructure connects to adjacent network tiers using multiple links so we're good there, too. If the client device connects to the network using a single network interface, we're going to end up causing an outage when we upgrade the switch to which that device connects. This configuration is only common in our office buildings for devices such as desktops and phones.

The second goal of our workflow optimization effort was to safely parallelize as many upgrades as possible. We knew from previous benchmarking that our system could handle hundreds of simultaneous upgrades. We wanted to routinely reach that number in our production environment, but only if it was safe to do so.

Our networks are deliberately designed in a fully resilient fashion. We know that each tier of our network connects to devices in the adjacent tier(s) in a particular way. Based on our network design, we came up with three rules that we felt would allow our system to achieve maximum NOS upgrade parallelization in a safe fashion:

Fig 1: Device A is upgrading. We can't upgrade device B since it's physically connected to device A.

Fig 2: We can't upgrade device D in parallel with any other devices since it's connected to a device for which we don't have full topology information. 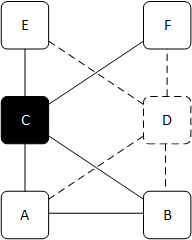 We store network topology information in a data store and designed an algorithm, called Meath's algorithm, that uses the data store and list of devices being upgraded as its inputs. Following the three rules above, the algorithm tells us if it's safe to upgrade a device now, or if we need to wait until other upgrades finish before starting to upgrade that device.

These rules can feel somewhat abstract, so here's an example of how they work in practice. Using the topology shown in figure 4, we'll work through upgrading the switches in aggregation block one (left), and the aggregation routers in block two (right).

We start with our upgrade list, sw1-1a, sw1-1b, sw1-2a, and sw1-2b. We also add in agg2a and agg2b. We run sw1-1a through Meath's algorithm and since no devices are currently being upgraded, we start that upgrade immediately. Then we run sw1-1b through the algorithm and run afoul of rule one - a directly connected device is upgrading. We put sw1-1b back in the queue. Next, we repeat the process for sw1-2a (the upgrade starts) and sw1-2b (rule one trips us up again, so this one goes back in the queue).

Next, we work on the aggregation routers. We check to see if it's safe to upgrade agg2a - no conflicts are found, so we start that upgrade. Then we move on to agg2b. It's not directly connected to agg2a so it passes rule 1. We've got complete topology information so it passes rule 2. However, we know that there are eight links between the aggregation layer and the core layer, and between the aggregation layer and the access layer. Four of each of those links are already out of service since agg2a is upgrading. We hold off on upgrading agg2b.

After a few minutes, sw1-1a's upgrade will finish so we can reprocess the queue. We'll do so each time an upgrade is finished, ultimately upgrading the entire device list and draining the queue. In this example, we were able to automatically select two sets of three devices to safely upgrade in parallel without causing any outages for multi-homed servers in this environment. We use the same topology and algorithm in the people space. This means that devices, such as phones and desktops, connected to a single access switch (sw1* and sw2*) would experience an outage when that switch was upgraded, however the aggregation router upgrades take place in a completely transparent fashion.

We augmented our original upgrade workflow to accept a list of devices to upgrade instead of just a single device. For each device in the list, we run Meath's algorithm to determine if it's safe to upgrade. If it is, we start the upgrade and move on to the next device in the list. If we find a device that isn't safe to upgrade, we put it at the end of the list and keep processing. Once we reach the end of the original list, we wait for some upgrades to finish and then process everything again, until we've started upgrades for all devices in the list and drained the queue completely. Using this upgrade workflow, we were able to upgrade thousands of network devices in a much shorter amount of time.

We've dramatically increased our upgrade velocity, upgrading 10% of our network plant in a single change window on multiple occasions. The number of incidents and outages attributed to network issues has also been significantly reduced. Our internal clients are also more flexible when allowing us to schedule network maintenance since they rarely see impact from our network maintenance activities, further increasing our upgrade velocity.

Automated NOS upgrades make up just one facet of how we've automated operating our network. We hope to describe our automated provisioning processes in future posts, along with some network design principles we use to build resilient networks for our clients.

Want to learn more about opportunities at Goldman Sachs? Visit our careers page.